Modern British is a Hampshire-based design and manufacturing company making everything from fitted kitchens to bedroom furniture.

Our emphasis is on superb handmade quality, design innovation and sustainability, all with our own unique design flair.

We offer a full design, supply & installation service for our kitchens, including worktops, splash-backs and appliances.

We sell to the public and our trade partners.

Modern British is brought to you by a team of award-winning architects and kitchen designers.

Our designers and artisans are co-located at our Hampshire manufacturing facility, giving us the opportunity to push the boundaries of innovation and attain the highest quality standards.

The core offer of Modern British is handmade bespoke hardwood kitchen furniture, supplied to retail customers and our trade partners. Every detail of our furniture is given deep consideration, using solid wood wherever possible, to provide a unique aesthetic with uncompromised durability and functionality.

Further to kitchens, we offer bespoke fitted and free-standing furniture for the entire home, and a bespoke design service.

You can visit our factory showroom in Fareham, Hampshire to see our stunning high quality bespoke kitchens in the flesh.

George is the charismatic Managing Director of The Modern British Kitchen Company. A prolific designer and restless innovator, George is always seeking new expression and functionality through design.

In his former career, he held the long-term position as the MD of a top 100 architecture practice, Gardner Stewart Architects. Under George’s leadership, the company built over ten thousand houses, winning an array of awards and accolades including Regeneration Architect of the Year.

As an architect and developer, George has worked with many kitchen companies but always felt that there was a spark missing. With this in mind, George grew Modern British from the seed of an idea “to create genuine innovation in the kitchen industry”, to establish an ambitious design and manufacturing company. Modern British was launched with the ambition to add innovative, fresh ideas to the timeless furniture classics.

If you get the opportunity to spend a couple of hours with George, you will find yourself leaving the room with an overwhelming enthusiasm and a new way of seeing the world.

If George isn’t in the design studio dreaming up new ideas, you will find him either cooking a stellar meal for his friends and family or at the helm of a boat, navigating the high seas!

Peter joined George in 2016 to set-up what is best described as an ‘ideas factory’, he brought with him a background in architecture and a track record for designing and project managing prestigious construction projects.  This wealth of experience in architectural design bears great fruit in the realm of kitchen and furniture design.

Bitten by George’s enthusiasm to bring innovation and wonderment to the genre of kitchen / product design, you will find Peter’s design influence across the whole collection of our furniture and accessories.

Peter’s passion for furniture design traces back to his childhood, much of which was spent in the showrooms and factory of his parent’s furniture company. Raised with an inherent understanding that design must be at the service of people, he is as passionate about the concept as he is about the detail.

Beyond the design studio, Peter’s creative endeavours extend to the recording studio, where he and his bandmates in The Stayawakes have just recorded and released their second album, ‘Pop Dreamz’. Head to Spotify to give your ears a treat! 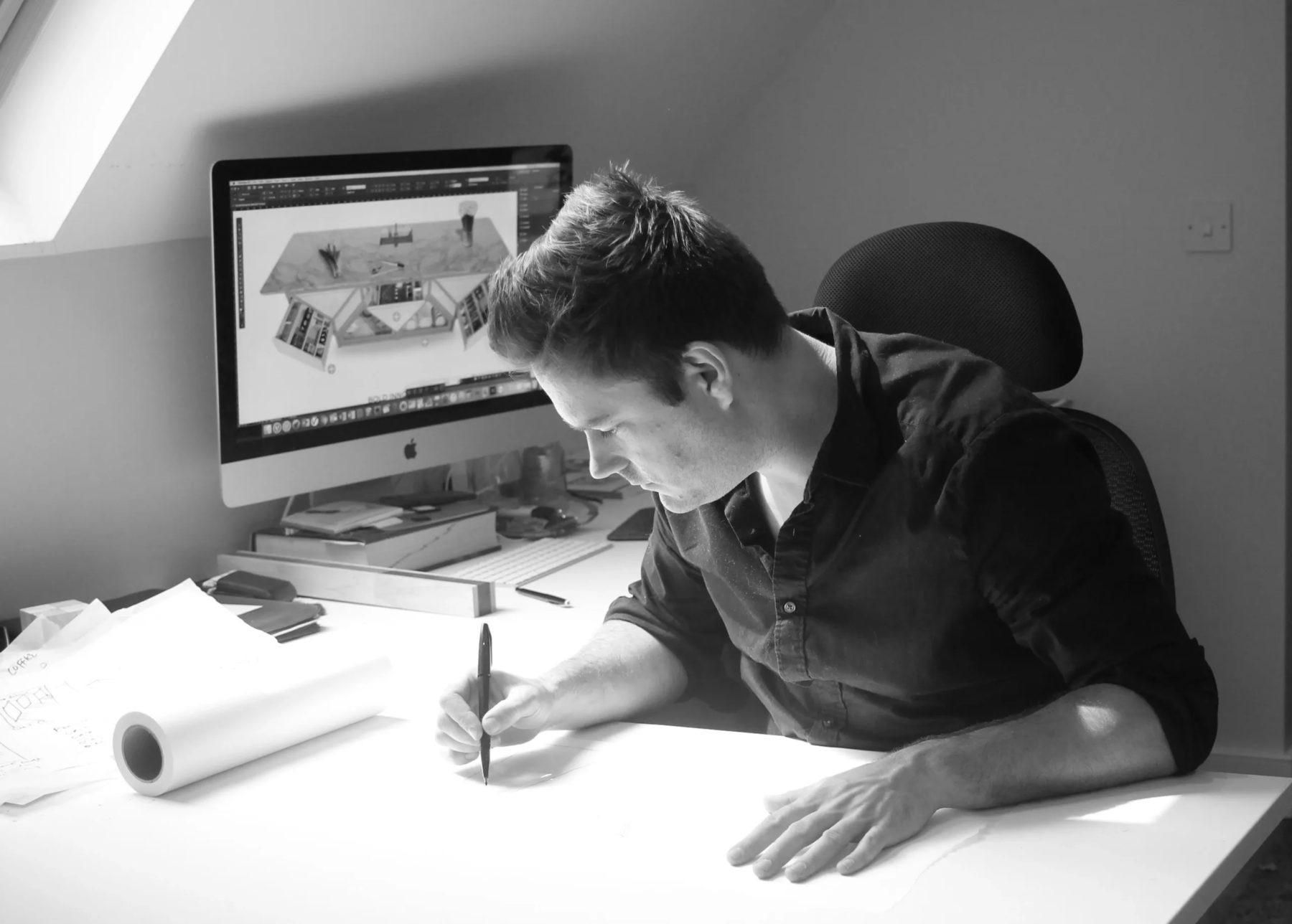 Andy is the master-craftsman behind the many wondrous products that leave the Modern British workshop. It takes a person with nerves of steel and an enduring sense of humour to bring the wild inventions of the Modern British design team to life, and nobody could fulfil that role better than Andy.

Andy’s decades of experience in creating fine joinery and boundless energy make him a tour-de-force for the research and development required to bring new products to life.

Andy is one of life’s givers. In addition to being a Ju Jitsu black belt, Andy gives freely and enthusiastically of his time to the local Scouts. This nurturing quality extends into the workshop and sets a tone for harmonious, collaborative working. 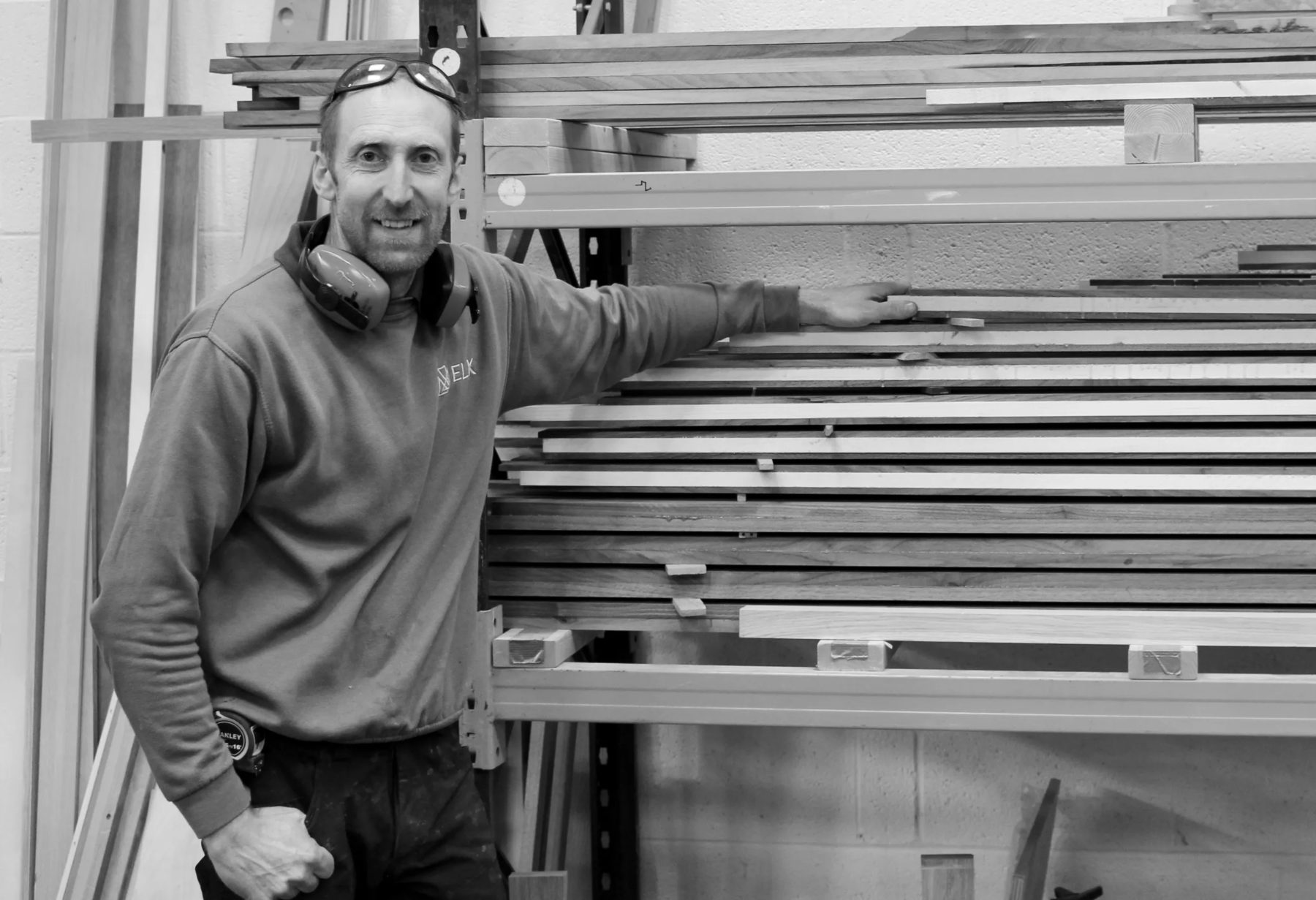 Our friendly experienced team provides a complete turn-key solution, giving our customers a reliable service and an enjoyable experience resulting in the kitchen that is right for you.

We sell fully fitted kitchens featuring our own handmade cabinets, and a wide range of worktops, appliances and splashbacks.

We offer a full kitchen design, supply and installaion service to the public and to our trade partners.

Supply and install kitchen appliances, worktops, splashbacks - everything and the kitchen sink!

Our beautiful range of uniquely designed furniture means that we can supply, for example, an oak table and chairs to perfectly match your oak kitchen cabinets.

Our architect-led design team is well resourced to assist with the design and R&D required for bespoke projects. Our craftsmen are here to make an idea a reality. 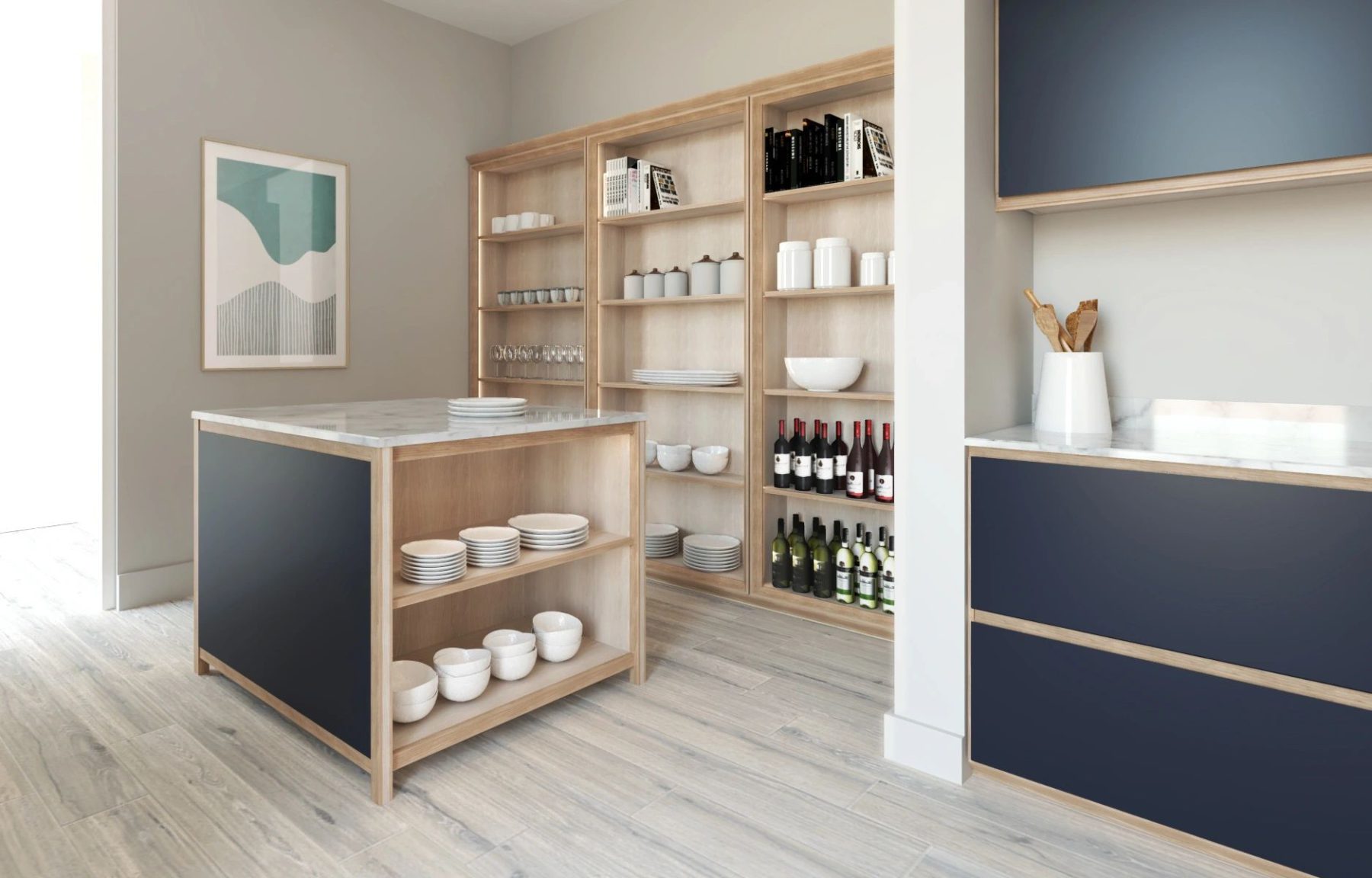